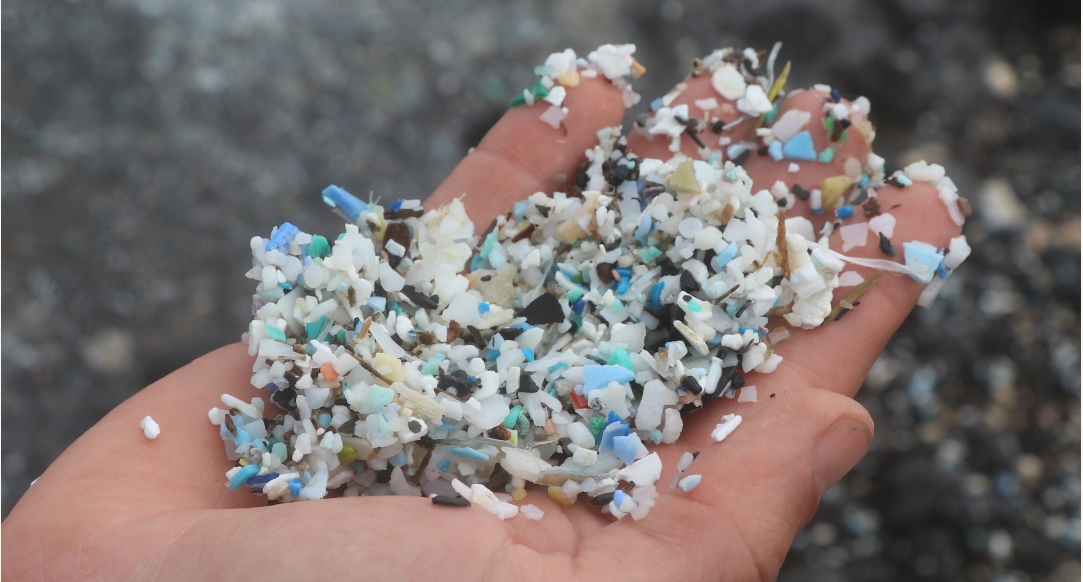 Written by Erica Cirino / The Revelator

Chemicals collect in microplastics, which then get eaten by fish, birds and seals — and by humans.

Even a hundred yards out from the stern of the old steel sloop, the fish at the end of the line looked enormous. And it was strong: As it leapt up out of the water in an attempt to free the hook from its mouth, its long body — green and yellow and speckled with fluorescent blue — slashed violently, unspooling more and more line. The sailor at the end of the reel had to put up a significant fight to avoid losing his rod in the vast blue Pacific.

“That is a mahi-mahi, the most beautiful fish in the world!” called out the ship’s captain. At the beginning of the third week of what would turn out to be a 23-day scientific expedition across the Eastern North Pacific Gyre — a highly polluted ocean vortex that swirls clockwise from the California coast to the Hawaiian Islands and back again — a fresh fish was a welcome source of food for his crew of eight. 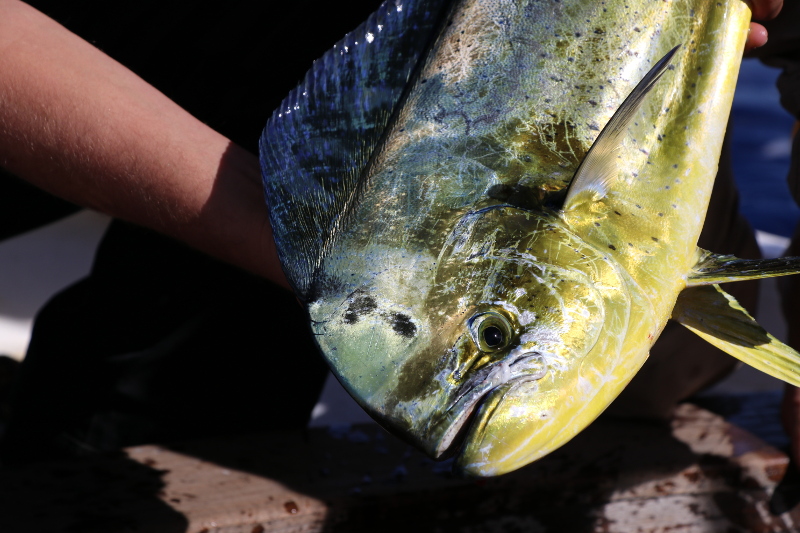 After several minutes of an intense duel, the sailor reeled in the fish, smiling.

That smile soon faded a bit. After the sailor was done separating the fish’s thick flesh from skin and bone, he cut open its stomach as requested by the ship’s lead scientist. Inside was a small flying fish. The scientist directed the sailor cut open that second fish’s stomach.

These plastic bits were what’s classified as “microplastic” due to their small size — less than .04 inches in diameter.

“That’s not too appetizing,” said the scientist, Kristian Syberg, a professor of environmental risk at Roskilde University in Denmark who was aboard the ship to sample the seawater for plastic.

Scientists who study plastic, like Syberg, are just beginning to understand the implications of microplastic and even smaller pieces of plastic called nanoplastic on the marine food web. Fishers, beachgoers and scientists are finding a growing number of marine animals — from live-caught fish to deceased seabirds and whales — with microplastic in their bodies. While the issue has only been studied in-depth for a handful of years, the latest research suggests these tiny pieces of plastic are capable of being transferred from organism to organism, wreaking havoc all the way up the marine food web — possibly all the way to humans.

At the Cornish Sea Sanctuary in the United Kingdom, Plymouth Marine Laboratory Ph.D. student Sarah Nelms compared the levels of microplastic found in the bodies of wild-caught Atlantic mackerel and the scat of the captive gray seals to which they were fed over the course of 16 weeks in 2016. She found microplastic in half the seal scat she studied, and in one-third of the mackerel fed to the seals. She posited that the mackerel — considered secondary consumers because they are one step above the bottom of the marine food web — ate microplastic particles along with their normal diets of zooplankton and this plastic was passed on to the seals.

“The seals are not exposed to any other sources of plastic,” Nelms told me recently.

Yet the plastic still ended up in their systems. In a paper published this February in the journal Environmental Pollution, Nelms and her coauthors noted that her team took “extensive contamination control measures” to prevent the seals from being exposed to other sources of plastic during the study. “We were therefore able to conclude that the microplastics we found in the seal scats came via the fish.”

The fishes’ bodies contained a higher number of plastic particles than the seal scat did, particularly microfibers, which crumble off fishing rope or are shed from clothing when washed. Nelms says this could mean the unaccounted-for plastic particles might be getting caught inside the seals’ bodies, causing unknown harm.

Microplastic is known to absorb chemicals from ocean water. When marine creatures consume microplastic, they’re also getting a dose of toxins. Syberg has studied this so-called “vector” effect where microplastic acts as a transporter of toxic chemicals. He says persistent organic pollutants, called “POPs” for short, are most worrisome because, once consumed, they tend to adhere to organisms’ fat cells where they are metabolized by the body and cause health problems.

Throughout history humans have released huge amounts of POPs into nature, where they persist and spread for decades without degrading. These chemicals, which include pesticides, industrial chemicals and unintentional pollutants such as DDT, PCBs and hexachlorobenzene, are considered highly toxic to humans and wildlife. They are proven to cause health problems such as allergies, reproductive and hormone problems, immune system disorders and cancer.

For this reason, and because there’s still so much scientists don’t known about how plastic acts inside the bodies of living things, Nelms says, “I would consider any amount of plastic inside an animal to be too much.”

Plastic’s movement up the marine food web appears to start with the ocean’s smallest animals, and even in these creatures can cause severe harm. Independent plankton scientist Richard Kirby recently filmed a common plankton species called an arrow worm found off Plymouth, in the U.K., eating a tiny plastic microfiber. The fiber blocked the worm’s gut, stopping the movement of copepods — its food source — through its body. Eventually this would kill the worm — though Kirby pointed out that doesn’t always happen with microplastic.

“In some cases the microplastics will pass through the animal or can be retained and eaten by another animal when the plankton itself is eaten,” says Kirby.

Widespread deaths of plankton caused by microplastic would certainly disrupt the marine food web. But their consumption is already changing the health of the oceans: Microplastic has been found in middle-ocean and deep-sea fish, which, like mackerel, are prey to ocean top predators, like seals or mahi-mahi. With each bite, plastic is moving up the food web, all the way to fish sold for human consumption in markets across the world. Kirby says scientists must urgently perform more research to gain a better understanding of the quantity and geographical distribution of microplastics in order to get a clearer picture of its effects on the oceans.

After my expedition across the North Pacific, Syberg took the plastic pieces and a chunk of the mahi-mahi’s flesh back to his lab in Denmark. He hopes to compare the chemicals found in the plastic with the chemicals found in the fish flesh to see if the vector effect had begun to act on the fish. While results of his chemical analyses are pending, he told me when I visited him in his lab a few months after our sailing trip that “I don’t even have to test the mahi-mahi and plastic to tell you that both of these things contain toxic chemicals.”

At sea, yes, we ate that fish. Just one more link in the chain.