From Mad Cow Disease to Agrochemicals: Time to Put Public Need Ahead of Private Greed 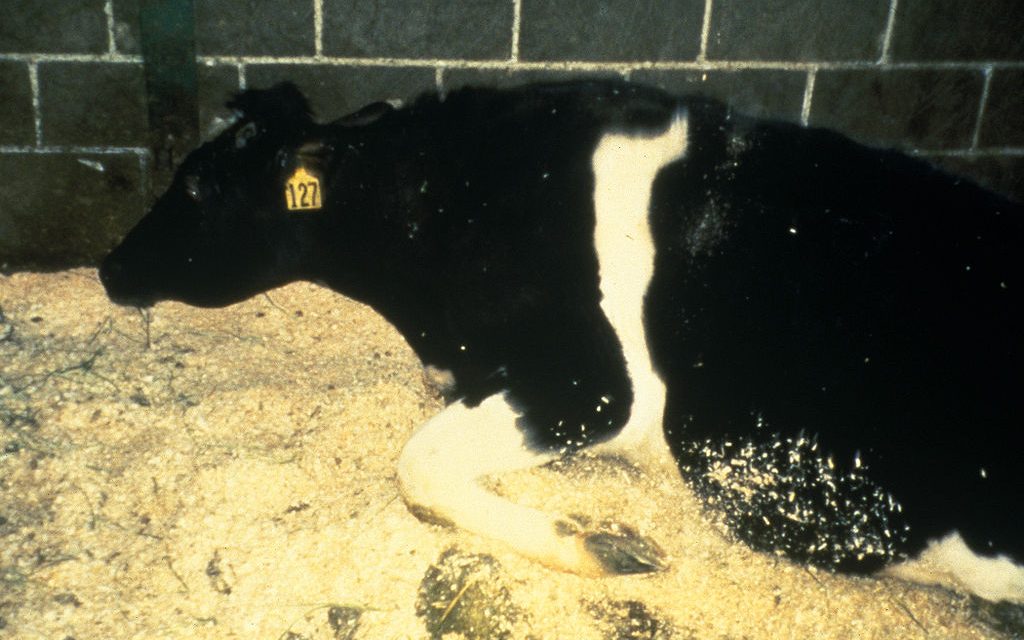 A cow with Mad Cow Disease (Bovine Spongiform Encephalitis) which has lost its ability to stand.

The first part of this article documenting the development of BSE in Britain was written by Rosemary Mason and is taken from her new report. It is fully referenced and cites sources and evidence in support of her claims. Additional reporting for the second part of the article was provided by Colin Todhunter.

In 1987, an epidemic of a fatal neurological disease in cows suddenly appeared in Britain. Cows became uncoordinated, staggered around, collapsed and finally died. The disease was called Bovine Spongiform Encephalopathy (BSE) because there were holes in the brain where prion protein cells became folded, had linked up and then split to cover the surface of the brain. There were more than 1,300 cases of BSE spread over 6,000 farms.

For at least 40 years, infected slaughterhouse carcasses had been rendered down and recycled into animal feed. Not wanting to waste anything, pressure cooking of the spinal cord and brain produced a sludge known as ‘mechanically-recovered meat’. The regulators allowed it to go into meat products. This processed meat and bone meal was turned into a coarse powder and was fed back to cows. Cows are herbivores and this way they were turned into cannibals.

By 1990, BSE had spread into 14 other species, including cats. Politicians, the food industry, media, the government, farmers and vets said BSE couldn’t jump species to affect humans and it was safe to eat beef. Advertisements were taken out in newspapers and politicians were shown eating steak tartare in the Houses of Parliament to boost the sales of beef. At an agricultural show, the Agriculture Minister John Gummer was seen offering a beef burger to his daughter.

In 1995, the first human under 40 contracted what became known as new variant Creutzfeldt-Jacob Disease (new vCJD, related to BSE and belonging to the same family of diseases). By March 1996, there were five cases and the government was forced to alter its advice. Kevin Maguire, a journalist, was lunching with someone in Westminster who said that scientists had discovered that ‘mad cow disease’ could jump species and had been found in humans.

Maguire said that it was a scandal in an effort to get every penny out of a carcass. His newspaper, The Mirror, was the first to break the news to the public, saying that humans could catch mad cow disease from eating infected beef and that the government was about to do a U-turn by finally accepting that the brain wasting disease may have been passed to people. This U-turn by ministers – who for 10 years had insisted it was impossible – was a devastating indictment of the British government and probably one of the worst examples of government since the war.

During 1996, 10 more cases of new vCJD in people under 40 were diagnosed. All died within 13 months and there was no cure. In 2005, the authorities thought the disease was over, but in 2009, a case was discovered in a 30-year-old man. Another case appeared four years later. Today, people are living with uncertainty, not knowing if they are incubating new vCJD.

The parents of children who had died from new vCJD said “We trusted government advice.” Each Christmas one mother had sent an e-mail to those she thought responsible with a photograph of her daughter and said your actions have deprived me of my daughter. Another parent from Scotland who had lost his 30-year-old son to the disease had tattooed on his arm the name of his son followed by: ‘murdered by greed and corruption’.

New Variant CJD is not a natural disease. It is an epidemic we have created. If the agricultural industry hadn’t decided to feed cattle with meat and bone meal, if the food processors hadn’t decided to scrape every last bit of flesh off the carcass, and if MAFF [govt ministry] hadn’t prioritised farming over food safety, all of the people who died would still be alive. This is the tragedy.

The following is taken from a publication compiled by the European Environment Agency, ‘Late lessons from early warnings’ (Patrick van Zwanenberg and Erik Millstone):

Many of the UK policy makers who were directly responsible for taking policy decisions on bovine spongiform encephalopathy (BSE) prior to March 1996 claim that, at the time, their approach exemplified the application of an ultra-precautionary approach and of rigorous science-based policy-making. We argue that these claims are not convincing because government policies were not genuinely precautionary and did not properly take into account the implications of the available scientific evidence.

… It is, however, essential to appreciate that UK public policy making was handicapped by a fundamental tension. The department responsible for dealing with BSE has been the Ministry of Agriculture, Fisheries and Food (MAFF), and it was expected simultaneously to promote the economic interests of farmers and the food industry whilst also protecting public health from food-borne hazards. The evidence cited here suggests that because MAFF was expected simultaneously to meet two contradictory objectives it failed to meet either.

The UK introduced legislation banning the use of contaminated ruminant protein for use in ruminant feed in 1988. By then, a million cows had entered the food chain. At the height of the scandal, British beef had lost around 60% of sales. Prior to the ban, microbiologist Stephen Dealler challenged the government’s claim over safety and was moved from his research lab.

However, Britain continued to export meat and bone meal to Europe. The European Commission asked the UK to introduce an export ban on feedstuffs, but the UK refused to do so. It was not until 1996 that the EC banned these exports.

From mad cows to GMOs and pesticides

Where glyphosate (and other agrochemicals) and genetically modified organisms (GMOs) are concerned, we again see commercial interests being prioritised and the public interest sidelined. Monsanto’s glyphosate-based Roundup was originally sprayed on crops in 1980 and on grazing land in 1985 (recommended by Monsanto scientists). GMOs entered the commercial market in the US in the 1990s. As shown in the report mentioned in the introduction to this article, the authorities did not heed the advice of key scientists and went ahead regardless.

Readers are urged to consult the report as it documents the duplicity that underpins the agrochemical/GMO agritech sector and describes how science and regulatory processes have been corrupted. In Britain, the government is saying that GM crops and Roundup are safe and intends to introduce these crops after Brexit.

Of course, heavily compromised industry-funded scientists and other lobbyists say the science is decided on GM and that glyphosate is safe. They say anyone who rejects this is anti-science and doesn’t care about world hunger because we can only feed the world by rolling out more GM crops and more agrochemicals. But this is little more than propaganda and emotional blackmail, part of an industry strategy designed to tug at the heartstrings of public opinion and sway the policy agenda.

We need to turn to author Andre Leu who has outlined major deficiencies in pesticide safety protocols. He offers a more realistic appraisal:

Washington State University researchers recently found a variety of diseases and other health problems in the second- and third-generation offspring of rats exposed to glyphosate. In the first study of its kind, the researchers saw descendants of exposed rats developing prostate, kidney and ovarian diseases, obesity and birth abnormalities. The study’s authors say:

The ability of glyphosate and other environmental toxicants to impact our future generations needs to be considered and is potentially as important as the direct exposure toxicology done today for risk assessment.

And where GMOs are concerned, they are little more than a flawed technological panacea that ignores the structural causes of malnutrition and hunger.

An increasing number of prominent reports and voices are now arguing that we do not need toxic chemicals to feed the world and that if we maintain our economic and agricultural course we are headed for disaster. FAO Director-General José Graziano da Silva recently called for healthier and more sustainable food systems and said agroecology can contribute to such a transformation.

Moreover, the new report from the UN High Level Panel of Food Experts on Food Security and Nutrition — Agroecological and other innovative approaches for sustainable agriculture and food systems that enhance food security and nutrition — argues that food systems are at a crossroads and profound transformation is needed. Many high-profile reports and figures have been saying similar things for years.

It is therefore disconcerting that the British government seems oblivious to the need of the hour and remains intent on pursuing an obsolete neoliberal, water-polluting, soil degrading, health destroying, unsustainable model of food and agriculture at the behest of corporate interests.

Mad cow disease did not just suddenly appear from nowhere. It was created by humans, particularly the farming industry and food processors. The British government kept on maintaining that eating beef was perfectly safe. A scientist who spoke out was silenced. The interests of the beef industry were paramount.

Evidence suggests there could soon be a second wave of cases affecting humans. It will be among people with a genetic predisposition towards longer incubation periods than the first patients had. This genetic predisposition is shared by half the British population. Some 177 people (as of June 2014) have contracted and died of vCJD.

That number is dwarfed when it comes to the spiralling rates of disease and illness that we now see among the British population. This too hasn’t happened for no reason. We see clear trends between the rising use of agrochemicals (especially glyphosate) and rising rates of morbidity, while much of the media and policy makers remain silent on this connection.

From the ‘great British beef scandal’ of the 1980s to ongoing pesticide issue, the profit motives of rich corporations continue to trump the public interest. 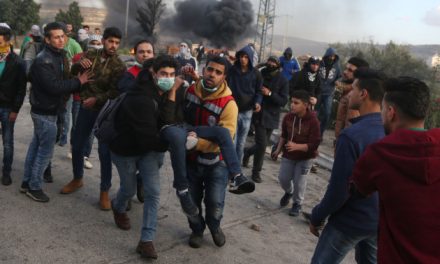