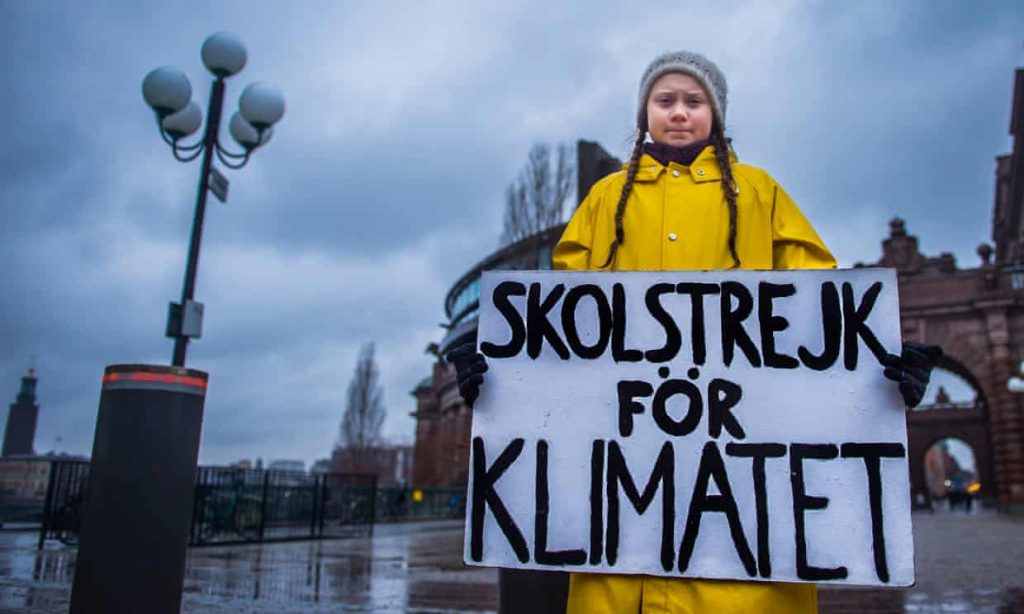 Written by Dana Nuccitelli / Bulletin of the Atomic Scientists

This story is part of Covering Climate Now, a global collaboration of more than 300 news outlets to strengthen coverage of the climate story.

Sixteen-year-old Swedish climate activist Greta Thunberg has ignited the climate movement, most recently taking a zero-carbon ocean voyage to America to attend the September 23rd UN climate summit in New York City. She’s become so effective and inspiring that those who want to maintain the status quo—predominantly wealthy and powerful old white men—have begun to attack her. Greta has been called “the international mascot for climate alarmism … mentally unstable,” “a millenarian cult leader,” a “deeply disturbed messiah of the global warming movement,” a “teenage puppet,” a “petulant child,” and much more.

Greta articulated her views in a TEDx talk in which she accurately described the state of climate science and the fact that if we are to meet the Paris climate targets, developed countries in particular must rapidly reduce their carbon pollution. As Greta notes, the world has thus far failed to act, in part because most people don’t realize that rapid change is required.

But climate scientists have been warning about a potential climate crisis for decades, while the Silent Generation and Baby Boomers failed to act on those warnings. As a result, they frittered away the opportunity to transition away from fossil fuels with relative ease. Because of those decades of inaction, we now face a daunting task.

While some older Americans may “have no patience for teenagers who lecture adults,” Greta’s generation has every right to criticize them for endangering humanity’s future prosperity. Let’s examine the history of climate change warnings and missed opportunities.

1960s–1970s. Every American president since the 1960s has been warned about climate change. In 1965, President Lyndon Johnson’s science advisory committee sent him an environmental report with a section on atmospheric carbon dioxide and climate change. These top scientists wrote: “Through his worldwide industrial civilization, Man is unwittingly conducting a vast geophysical experiment. Within a few generations he is burning the fossil fuels that slowly accumulated in the earth over the past 500 million years … The climatic changes that may be produced by the increased CO2content could be deleterious from the point of view of human beings.”

In 1979, the world’s foremost climate scientists published a major climate report finding that if humans double the amount of carbon dioxide in the atmosphere, Earth’s average surface temperatures will warm 3 degrees Celsius (plus or minus 1.5 degrees Celsius)—consistent with estimates from today’s climate scientists, and an extremely dangerous level of climate change. The report included a similar warning to that in 1965, “Man is unwittingly conducting a vast experiment … marked changes in climate, not controllable through local or even national efforts, could occur.”

That year, President Carter installed 32 solar panels on the White House and called for a campaign to conservative energy during the Middle East oil embargo, but President Reagan did not share Carter’s environmental awareness and removed the solar panels in 1986.

1980s. In the early 1980s, Exxon’s climate scientists issued internal company reports warning that fossil fuel consumption could double atmospheric carbon dioxide levels by 2060, pushing global temperatures up by more than 2 degrees Celsius. In 1988, an internal Shell company report included a similar warning, but noted that we could reach doubled atmospheric carbon dioxide levels as soon as 2030 in a scenario with high fossil fuel consumption. Shell’s scientists warned the company: “The [climate] changes may be the greatest in recorded history … the energy industry will clearly need to work out the part it should play in the development of policies and programmes to tackle the whole [climate] problem.” As we now know, the industry decided to spend hundreds of millions of dollars in a public disinformation campaign to undermine support for climate policies.

The congressional hearing and scientific testimony had an immediate impact on policymakers. In a speech delivered on the campaign trail a few months later in August 1988, soon-to-be president George H.W. Bush declared, “Those who think we are powerless to do anything about the greenhouse effect are forgetting about the White House effect.” President Bush soon had an opportunity to deliver on that promise during the first major diplomatic meeting on global warming, held in Noordwijk, Netherlands in November 1989.

But, as Nathaniel Rich documented for the New York Times, Bush had appointed climate denier John Sununu as his chief of staff. Upon hearing a description of Hansen’s congressional testimony, Sununu declared it “technical garbage.” While EPA Administrator William K. Reilly fought for the United States to take a leadership role by demanding a global treaty to reduce carbon emissions, Sununu overruled him. The White House censored testimony delivered by Hansen and other government scientists in a second congressional climate hearing in 1989. And at the November international climate negotiations in Noordwijk, Sununu’s representatives forced the conference to abandon a commitment to freeze greenhouse gas emissions.

1990s. By the time of the 1992 Rio Earth Summit, Bush was sounding like Donald Trump when speaking about climate change, declaring, “I’m not going to go to the Rio conference and make a bad deal or be a party to a bad deal.”

Bill Clinton defeated Bush in the presidential election that November, and in 1993 proposed an energy tax to begin addressing climate change. But, spooked by the close call at the Noordwijk international climate negotiations, Exxon and other fossil fuel companies had begun spending millions of dollars campaigning against climate action, eroding support in Congress and dooming the bill.

In 1995, the Intergovernmental Panel on Climate Change (IPCC) concluded, “potentially serious [climate] changes have been identified, including an increase in some regions in the incidence of extreme high-temperature events, floods, and droughts … Delaying [mitigation and adaptation] measures may leave a nation or the world poorly prepared to deal with adverse changes and may increase the possibility of irreversible or very costly consequences.”

While President Clinton ultimately signed the Kyoto Protocol in 1998, the Senate had already voted 95-0 to pre-emptively declare its opposition to the treaty, and refused to ratify it.

2000s. In 2001, the IPCC warned, “some extreme events are projected to increase in frequency and/or severity during the 21st century due to changes in the mean and/or variability of climate, so it can be expected that the severity of their impacts will also increase in concert with global warming … The impacts of future changes in climate extremes are expected to fall disproportionately on the poor.”

President George W. Bush took office that year, and his 8-year presidency was marred by censorship of federal climate science reports, obstruction of international climate negotiations, and a refusal to implement any federal climate policies.

The 2007 IPCC report detailed many climate change risks, including of large-scale species extinctions: “Approximately 20-30% of plant and animal species assessed so far are likely to be at increased risk of extinction if increases in global average temperature exceed 1.5-2.5degrees Celsius.”

In 2009, the United States began to turn the corner on climate policy. With President Obama in the White House and with control of Congress, Democrats nearly passed a carbon cap and trade bill. The legislation passed the House, but the threat of a filibuster from all Senate Republicans and a few Democrats from fossil fuel states killed the effort.

2010s. Lacking sufficient congressional support, President Obama was forced to resort to executive action, most notably in his second term with the EPA’s Clean Power Plan and his signing of the Paris climate agreement.

The IPCC’s climate warnings grew louder in its 2014 report, which concluded, “Impacts from recent climate-related extremes, such as heat waves, droughts, floods, cyclones, and wildfires, reveal significant vulnerability and exposure of some ecosystems and many human systems to current climate variability … Climate-related hazards affect poor people’s lives directly through impacts on livelihoods, reductions in crop yields, or destruction of homes and indirectly through, for example, increased food prices and food insecurity.”

Unfortunately, after his election in 2016, President Trump reversed all of the climate policies enacted by the Obama administration, including announcing America’s withdrawal from the Paris agreement and gutting the Clean Power Plan. While US carbon pollution fell over the past decade thanks to a combination of the 2008 economic recession and a transition away from dirty coal power, emissions spiked in 2018. Globally, most countries’ climate policies remain insufficient to meet the Paris targets, with the United States among the worst offenders. As the independent organization Climate Action Tracker has noted, “Reaching the [nationally determined contribution] target would have required implementing additional policies under the Obama Administration’s Climate Action Plan, which President Trump has rescinded.”

In 2018, the IPCC published a special report that concluded, “The combination of rising exposure to climate change and the fact that there is a limited capacity to adapt to its impacts amplifies the risks posed by warming of 1.5 degrees Celsius and 2 degrees Celsius … the lower the rise in global temperature above pre-industrial levels, the lower the risks to human societies and natural ecosystems.” According to NASA data, we surpassed the 1 degree Celsius milestone around 2016.

We wasted decades; now time is running out. Crucially, the longer we wait to substantially curb carbon pollution, the more difficult and expensive it will be to avoid a climate crisis. This is elegantly illustrated in a chartsometimes referred to as the “ski slopes.” Had global emissions peaked in the 1990s, we could have met the Paris targets by slowly and gradually reducing carbon pollution in the ensuing decades—a “bunny slope” path. Had they peaked in the early 2000s, we could have met the Paris goals with more moderate emissions cuts—the “intermediate slope.” But emissions have not yet peaked as we approach the year 2020, and we’re nearing the “double black diamond” slope requiring extremely rapid pollution cuts if we’re to avoid dangerous warming beyond the Paris targets.

In short, despite decades’ worth of warnings from climate scientists, the elder generations squandered away the opportunity for a relatively easy transition away from fossil fuels toward a stable climate future. Much of the blame lies with the fossil fuel industry and its costly climate disinformation campaign, but there is plenty of blame to go around.

While misogyny is undoubtedly at play in the attacks on Greta Thunberg, simple guilt is another likely root cause. Greta is the voice of a generation who will bear the consequences of their elders’ decades’ worth of missed opportunities and failures to heed climate scientists’ warnings and begin the transition away from fossil fuels while it could still be done gradually and with relative ease. Now, because of those failures, dramatic policies to rapidly overhaul our infrastructure are needed, in the mold of a Green New Deal. Some Republican policymakers are finally calling for small steps to address the problem like encouraging “innovation,” but while such modest measures would have been welcome 20 or 30 years ago, they are wholly insufficient to meet the scope of the problem we face today.

Until our leaders implement major policy changes to mitigate the climate crisis, Greta’s generation will be wholly justified in lecturing them for selfishly frittering away the stability of our global climate. And based on the abhorrent attacks on Greta that clumsily mask a deep sense of guilt, her critics know it.