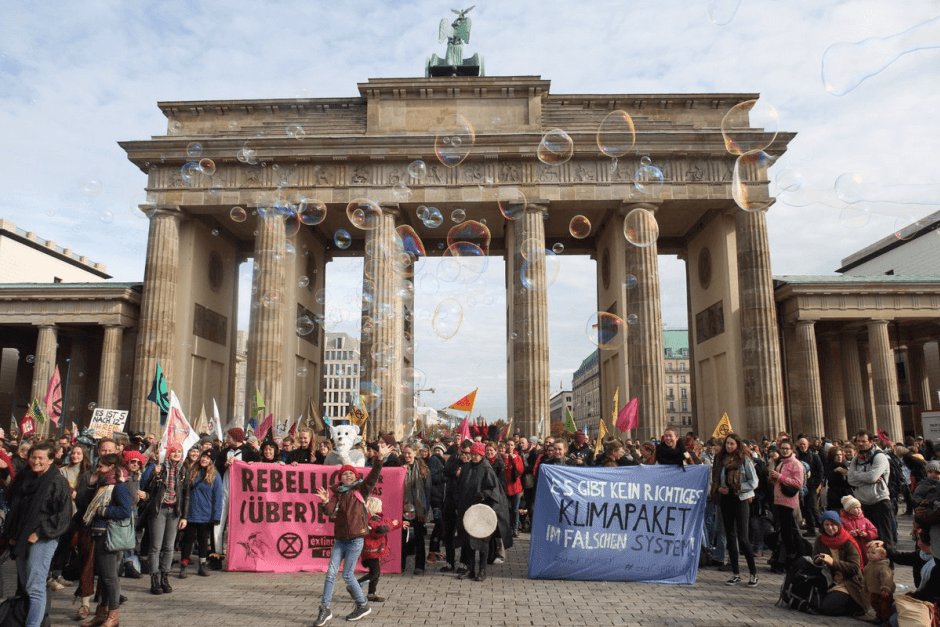 As we approached the first weekend of the October Rebellion, it was humbling and inspiring to see that rebels showed no sign of slowing down.

In fact, day 5 was marked by a series of exciting milestones: XR Dublin had their first arrests; XR Israel reached a new level of direct action, as rebels glued themselves to the National Stock Exchange in Tel Aviv; and Aussie rebels pioneered the delightful new concept of ‘Civil Disco-bedience’.

While some sites have been cleared of permanent roadblocks, rebels stayed resilient everywhere: hunger strikers in Italy entered their fifth day, and declared their intent to continue until the Italian prime minister agreed to meet them. Rebels in Australia were undeterred by their government’s plans to fast-track laws targeting protesters. While in Paris, rebels withdrew from Chatelet but only in order to later reappear in a yet more disruptive location!

Day 5 also featured beautiful instances of solidarity between human beings facing the same fate: in Paris, the Yellow Vests supported XR actions, in spite of police attempts to set the groups at odds; and in Buenos Aires, rebels came out to support the native Argentinian population on the Last Day of Free Peoples, which has been celebrated since before the start of the Spanish invasion of the Americas in 1492.

In the words of a rebel in France: ‘each in our own way, but ultimately together.’

That is how we will win.

XR Netherlands start off their Saturday in style

If you’d like to help, please check out our guide and learn more about XR.

To connect to rebels in your local area, get in touch with your nearest XR group. If there’s no active group near you, you can start your own!

If you’d like to see previous newsletter issues, you can find them here.

As we enter this crucial phase in human history, our Rebellion will need money to make sure our message is heard. Anything you can give is appreciated.

Action Highlights Back to top

The protests in Berlin became distinctly political on Friday, with sit-ins at both the Ministry of Economic Affairs and Energy, and the Ministry of Food and Agriculture.

A couple of kilometres away, rebels from XR Norway and XR Sweden put on a fantastic show outside their respective embassies in Berlin. Swedish rebels also glued themselves to the gates of a coal-fired power station on the outskirts of the city.

Scandinavian rebels, including Danes and Finns, have been the unsung heroes of the Berlin rebellion. Hundreds of them have played vital roles in the actions throughout the week, and they have enlivened the rebel camps.

After about 60 hours of occupation, the blockade at the Marschallbrücke bridge near the Reichstag was finally cleared out by police — and cleaned up by XR — and 3000 rebels then gathered at the Brandenburg Gate, using all manner of colour and noise to get the climate crisis message across.

Everyone then marched to Potsdamer Platz, where there was a spontaneous blockade of the central junction. There, the band Bonaparte had been waiting for the rebels inside an XR truck. When the sides of the truck suddenly came down for a surprise concert, well, you can imagine the reaction! The rebels are probably still dancing now…

XR Israel Parties in the Squares

With major actions happening during some of the holiest (and quietest) days in the Jewish calendar, it has been a life of two extremes for Israel’s rebels.

On Thursday, they brought together ten environmental organisations and a host of prominent musicians and artists for a nationwide ‘Climate Change in the Square’ action. In cities and villages across the country, central squares became hubs for talks and activities concerning the climate crisis. The largest gathering took place in Tel Aviv, with a crowd of 3000 people listening to speeches and dancing to rock music.

Israel is now celebrating Sukot – a holy week that celebrates the history of Jewish nomadism and involves living and eating inside temporary dwellings outside the home. Rebels will be creating their own XR induction dwellings to teach their communities about the climate crisis.

XR Israel broke direct action ground earlier in the week when rebels glued themselves to the national stock exchange. Fifty rebels were ready and waiting to be arrested, but the Israeli police simply withdrew.

Rebels then upped the ante by de-gluing themselves and swarming nearby roads! Again the police refused to act, leaving undercover officers at the scene to monitor the situation. After six hours of non-stop disruption, the exhausted but satisfied rebels decided to go home!

Friday saw a day of rebellious culture in the UK capital. Though some sites have been cleared, rebels are keeping nimble and resolving to ‘flow like water’ to cause more disruption!

Rebels held a 13-hour protest outside Broadcasting House to call on the BBC to tell the truth. Six people glued their hands to the doors, and two brave rebels climbed onto the canopy roof to wave the XR banner high.

Outside Scotland Yard, rebels from the XR Disabilities Network protested to demand their confiscated kit be returned to them. Plan B have penned a letter to the police detailing human rights abuses in the policing of the rebellion, including seizing disability ramps and toilets.

Rebels also staged an action at Liverpool Street outside a government Oil and Gas Fiscal Summit.

For some uplifting XR-based comedy, check out this special Mash Report on the Rebellion.

For the London newsletter with updates from all the sites, click this button:

London rebels, check out our Rebellion Needs page for practical ways you can help rebels on the ground right now and other essential info.

In Perth, 400 rebels marched through the heart of the city on Friday morning and 65 arrests were made when protestors refused to clear an intersection.

In Melbourne there has been no let-up in activity. Thursday morning rush hour traffic was brought to a standstill by eight activists who locked themselves together in a circle around a centrepiece of potted plants. Meanwhile, at a second location on the King Street Bridge, protesters glued themselves to the road causing further disruption.

After a week that saw a total of 23 actions and 110 arrests, Melbourne rebels once again put on their boogie shoes for some civil DISCObedience and danced down the roads. They declare: ‘A rebellion without dancing is not one we want to be part of!’.

Paris Rebels Get Ready for the Weekend

After 100 hours of successful occupation, rebels in Paris decided to leave Place de Chatelet and take some rest ahead of the weekend’s action. This move is strategic: by occupying and disrupting another major area of the city, we will let the government know that we’re here to stay, and that we’ll be everywhere.

To mark our exit, a troop of cycling rebels journeyed all the way up to the Champs Elysées to disrupt one of Paris’s busiests roundabouts, the Arc de Triomphe. This was a call for an urgent transition to the soft mobility of bicycles in a city suffocated by car traffic, pollution and incessant noise. It was also an occasion to hang the XR flag on this iconic monument.

Police have made no arrests, treating the Yellow Vests and XR rebels very differently, but their strategy of dividing people is clearly failing. A Yellow Vest tent has been erected on the Chatelet occupation and the Yellow Vests actively participate in XR France’s demonstrations, general assemblies and reflections.

XR and the Yellow Vests will demonstrate again on the streets tomorrow: each in our own way, but ultimately together.

Hey, Ho! Fossil Fuels have got to GO!!

South Africa’s capital echoed with the joyful song of over 80 rebels on Friday, as they joined together to stage a non-violent action outside the Department of Mineral Resources. The protest was a celebration of life and unity, with puppets, dance and a classic XR die-in. It culminated in delivering a letter to the Minister, urging immediate action.

The action was largely led by youth, and supported by organisations like Right2Know, Mining Affected Communities United in Action, and FridaysforFuture.

Friday morning saw between 250 and 300 rebels hit the streets of Amsterdam in a frenzy of coordinated chaos. Nine key locations were simultaneously swarmed, blocking traffic for seven minutes at a time, including Amsterdam Centraal train station and the Scheepvaartmuseum Museum.

Rebels passed the time by singing songs and chatting to bystanders or idle car-drivers, many of whom joined in for a sing-along or two!

XR Buenos Aires joined a native Argentinian event in solidarity. The two groups had met at a protest outside the Brazillian embassy, over the Amazonian fires. For centuries, the 11th October has been celebrated as the Last Day of Free Peoples, even before the Spanish invasion begun on the 12th October 1492.

We cannot preserve the beauty of the planet without listening to the voices of the native people, and gaining a fuller understanding of their history of resistance and relationship to the land.

Rebels in Prague held a die-in with parents bringing their children dressed in homemade costumes. Some were dressed as animals that risk extinction, while mothers carried placards with a gravestone feel, highlighting the many endings and losses we face due to species extinction.

Greta Thunberg was in Denver yesterday afternoon to bolster youth organisers’ spirits. They packed out the amphitheatre in Civic Centre Park to call for an urgent transition to 100% renewable energy, and for consequences for ecocidal corporations. This rally comes as outrage intensifies throughout the state over continued attempts to frack and plunder Colorado’s beautiful landscape.

XR Front Range, Colorado, helped to assemble the thousands-strong rally along with other groups. The movement is growing in Colorado, with climate strikes held in a reported 30 cities and towns last month and rebels getting theirfirst 5 arrests.

See more of the beautiful and courageous action from the International Rebellion in XR Unchained. There is so much to tell.

Amsterdam. Debut of the yellow boat!

Brno,Czech Republic. The ice is melting.

IST exists to connect and support XR branches across the world, for a more global approach to the planetary crisis we face.

Based outside of the UK and interested in getting involved in an International Support working group? Get in touch!

Dina Jung, 77, is a retired teacher from the Isle Of Wight

‘I’ve been an environmentalist for 50 years and completely disillusioned… When I found out about XR I just burst into tears. At long last’.

We are receiving amazing human stories and we want to know yours. To read more – or to write your own – join our Facebook group.

Thank you for reading! Stay strong, rebels, your energy is so valued.

If you have any questions or queries, please get in touch at [email protected].

As we enter this crucial phase in human history, our Rebellion will need money to make sure our message is heard. Anything you can give is appreciated.