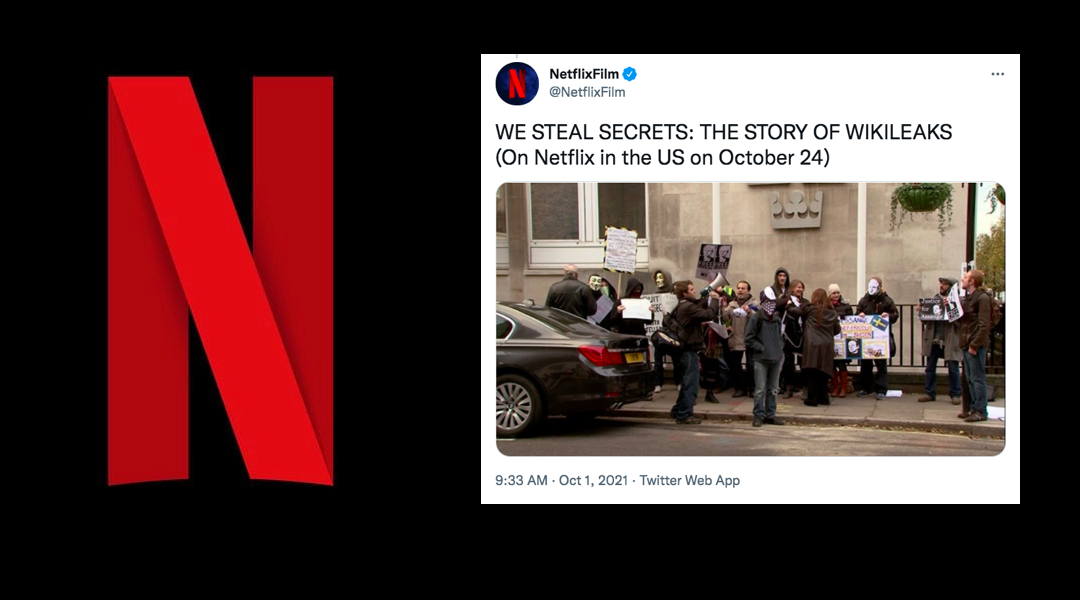 Netflix will begin streaming a brazen hatchet job on Julian Assange and WikiLeaks for its American subscribers on October 24th, just three days prior to a significant court date in Assange’s fight against extradition from the UK to the United States on October 27th.

“You can stream We Steal Secrets: The Story of WikiLeaks on Netflix starting Sunday, October 24, 2021, at 12 AM PT / 3 AM ET,” Netflix Schedule reports.

We Steal Secrets was a “documentary” that is now so outdated beyond its 2013 release that one of its central characters, Chelsea Manning, is referred to by a dead name throughout its entirety. Why choose this specific moment to release it?

Well it doesn’t make much sense at all, if the timing wasn’t deliberately geared toward damaging Assange’s reputation in the nation whose government is trying to extradite him for exposing its war crimes. Assange’s October court date was set way back in August and Netflix didn’t announce it had scheduled to begin streaming this film until two weeks ago.

Three days before a crucial court hearing – as Julian Assange fights against extradition to a US super-max prison – Netflix is showing Alex Gibney's execrable propaganda film We Steal Secrets. I wrote a post detailing its smears at the time of its release https://t.co/lJJUoerJDq https://t.co/BMpNrg2h4i

After all, We Steal Secrets was so egregious in its spin that not only did WikiLeaks supporters like World Socialist Website and journalist Jonathan Cook pan it as a smear at the time, but WikiLeaks itself went to the trouble of publishing a line-by-line refutation of the mountains of propaganda distortion heaped on the narrative by filmmaker Alex Gibney.

“Gibney’s latest release—We Steal Secrets: The Story of WikiLeaks—is something else again,” World Socialist Website wrote in 2013. “The 130-minute feature is a political hatchet job against Julian Assange and dovetails with the media and US government campaign against the WikiLeaks web site. Whether Gibney has shifted to the right or simply revealed the fatal limitations of his liberal ‘oppositional’ views is a matter for a separate discussion. In any event, his newest work is an effort at disinformation.”

This would not be the first time Netflix has helped circulate narratives that advance the interests of the US empire, or the second, or the third, having already run blatantly propagandistic “documentaries” advancing imperial interests in nations like Ukraine, Russia, Egypt, and multiple ones about Syria. Netflix has also signed deals with the Obamas and with British royalty.

So they’re not exactly looking out for the little guy, which from a company worth an estimated $229 billion should come as no surprise.

Still, such open facilitation of the world’s most powerful government in its campaign to imprison a journalist for inconvenient journalistic activity is a special kind of reprehensible. If there is a healthy humanity in the future, it will look back on the worldwide smear campaign against Assange and WikiLeaks with horror.

Note from the author: My work is entirely reader-supported, so if you enjoyed this piece please consider sharing it around, following me on Facebook, Twitter, Soundcloud or YouTube, or throwing some money into my tip jar on Ko-fi, Patreon or Paypal. If you want to read more you can buy my books. The best way to make sure you see the stuff I publish is to subscribe to the mailing list for at my website or on Substack, which will get you an email notification for everything I publish. Everyone, racist platforms excluded, has my permission to republish, use or translate any part of this work (or anything else I’ve written) in any way they like free of charge. For more info on who I am, where I stand, and what I’m trying to do with this platform, click here.