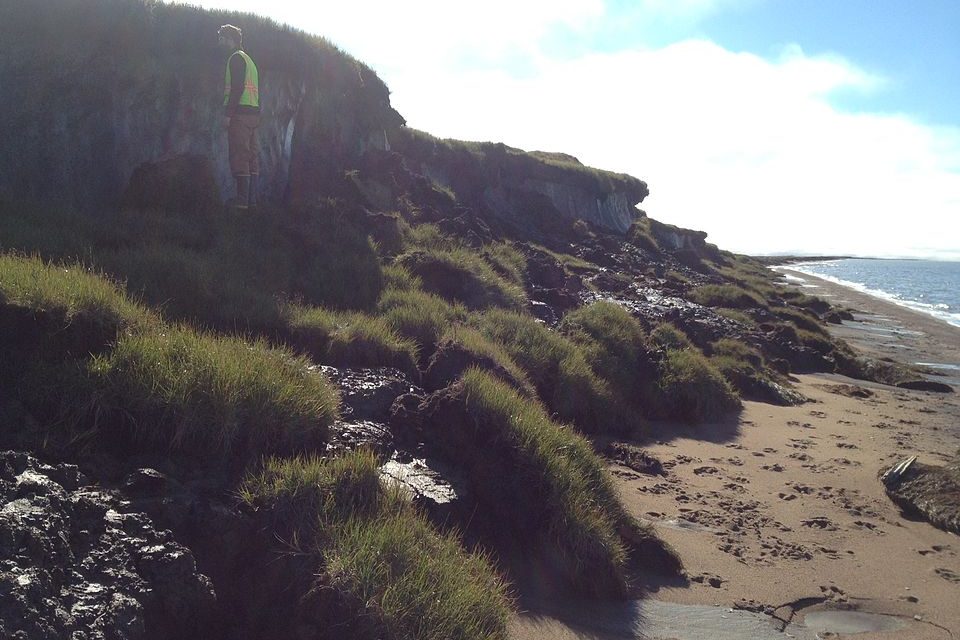 “The University of Alaska Fairbanks (“UAF”) is a hub for Arctic climate research, and a magnet for top scientists and international collaborations— and it’s in trouble.” (Source: Sabrina Shankman, A Death Spiral for Research: Arctic Scientists Worried as Alaska Universities Face 40% Funding Cut, Inside Climate News, July 19, 2019)

UAF’s International Arctic Research Center sits at the pinnacle of worldwide climate research “with experts on permafrost, short-lived climate pollutants, sea ice and more, UAF has earned a reputation as a leader in Arctic climate research. Its research is often the product of years of work with partners from universities worldwide,” Ibid.

However, recent events make it appear that climate science is too hot for political comfort as study after study identifies shocking volumes of collapsing/thawing permafrost, which covers 25% of the Northern Hemisphere.

Crumbling permafrost is an extraordinarily dangerous situation that, over time, can lead to deadly RGW (runaway global warming) and subsequent burn-off of mid-latitude agriculture, as people starve and scream, in that order.

In point of fact, global warming has been on a binge of late; in the North it’s heating 2-4xs faster than anywhere else on the planet. As a result, permafrost is drip-drip-drip thawing at record rates, well beyond any and all analytical predictions; it’s a real stunner!

But, not to worry, there’s a political answer: Alaska’s governor, taking field notes from “Donald Trump’s Tips on Handling Climate Change” proposes: Defund it! Kill it! Hide it!

Ergo, Alaskan Governor Michael Dunleavy (R) will likely go down in history as the nasty ole “Ghoul of Runaway Global Warming.” After all, the governor is slashing the University of Alaska’s funding by 40%. Thereafter, no one will know for sure what’s happening of consequence in the rambunctious North, as the world-famous International Arctic Research Center limps along as a result of hefty cuts in funding with some critical research coming to a screeching halt.

In the wake of the Gov’s big cuts, a plague of doom spreads throughout the scientific community. According to Sabrina Shankman of Inside Climate News: “The state’s flagship university at Fairbanks is a hub of climate research that brings together scientists from around the world.”

All of which begs the most obvious of questions: At a time when scientists are floored by global warming’s unrelenting walloping of permafrost in the Northern Hemisphere, how and why is crucial climate research cut to the bone?

Is it merely coincidence that spending cuts hit just as global warming starts “strutting its stuff like never before” with collapsing permafrost, like fallen tinker toys that, heretofore, was solid as the Rock of Gibraltar, over eons? What’s up with this sudden massive thawing of rock-solid permafrost that contains tons and tons of carbon?

The brutal truth is: Cascading permafrost, at unprecedented volume and rate of collapse, is a powerful signal that anthropogenic (human-caused) greenhouse gases are way too excessive and thus disrupting the climate system.

Nobody ever expected it to happen so dramatically, so quickly, without warning. As such, ecosystem collapse in northern latitudes is not “a disaster in the making.” It’s already “a disaster happening.”

“Dunleavy’s spending cuts were part of an attempt to make good on a campaign promise: to increase the state’s Permanent Fund Dividend—the checks sent to residents each year from royalties the state collects from the oil industry. The amount typically ranged from $1,000 to $2,000 per person, but that was reduced by former Gov. Bill Walker as he sought to cover a budget deficit. The unpopular move may have been the nail in the coffin of his re-election campaign. Dunleavy promised $3,000 for each resident if elected,” Ibid.

“Halfway through Dunleavy’s first year in office, that promise comes at a steep cost. The cuts to the university were among several budget cuts Dunleavy made using his veto power that will undermine key social services across Alaska—from Medicaid to help for the elderly and homeless. But the university system took the biggest hit,” Ibid.

Thus, the Gov’s priorities are: An additional one-thousand-dollars in voter’s pockets is more important than social services for the elderly and homeless and Medicaid and climate research, all of which, unfortunately, adds up to the perfect recipe for unmitigated disaster with “eyes wide shut.”

According to Governor Dunleavy, paying off voters with a measly thousand bucks of extra pocket cash supersedes UAF as the world’s leading center for Arctic research with volumes of studies published in scientific journals, bespeaking of a world-class institution.

Now, its stellar reputation has suddenly been cut off at the knees, coincidentally, at the very moment when its obligation to analyze and prep society for a major existential threat have never been so crucial, as an out of control climate system fast approaches “the perfect setup” to clobber comfy lifestyles.