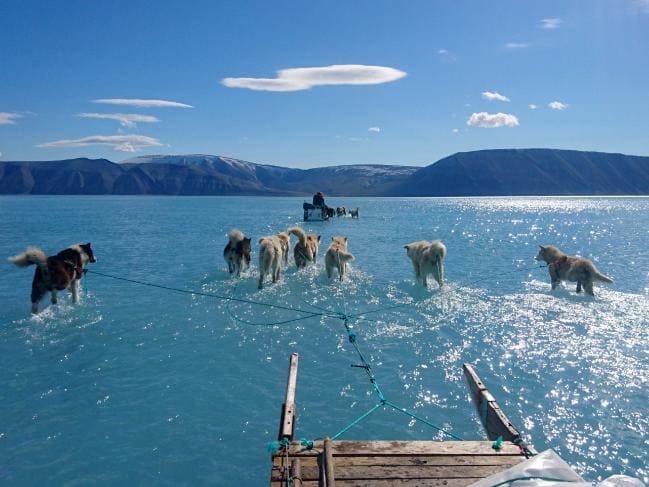 Greenland is one of the biggest targets for global warming, in part, because it’s so big it’s hard to miss. And sure enough, only recently crazy halting weather with inordinate hot temperature hit Greenland bull’s-eye, dead-on with one helluva meltdown.

That’s bad news for pretty much everybody on the planet.

On the hottest days, the melt-off could fill 3 million Olympic-sized pools end-to-end, extending from California to Maine, back and forth, 17 times. Eureka! That’s only one day. It’s staggering.

The easy answer: Greenland is melting because global warming is acting up, a lot. But, it’s more complicated. Part of the meltdown includes a 4-mile-wide iceberg that broke off the Helheim Glacier July 11th. That’s equivalent to a small town floating/melting along the southeastern coastline of Greenland.

In that regard, according to the Union of Concerned Scientists: “Climate Hot Map, Helheim Glacier – The glacier was stable from the 1950s to 2000.” Thereafter, rapidly rising temps jarred it loose from its stable moorings, losing five miles of ice in its first five years of the 21stcentury. Oops! So much for 50 years of stability.

In point of fact, Greenland’s glaciers, in toto, have doubled their rate of retreat this century, which is more than any historical data. That’s not only ominous, it’s indicative of the enormous power behind anthropogenic turbo-charged climate change. It’s happening fast and faster.

But still, it’s not unusual for parts of Greenland to melt every summer when the planet tilts its northern face towards the sun. Then, year-by-year with regularity about 10% of the ice sheet hits a melting point. However, this year the first big heat wave in June hit 45% of the ice sheet with melting points as air temps hovered 10°C to 15°C above normal, which is beach weather for Greenland.

Not only that, but wistfully an ongoing second heat wave is now confirming 10% melting points are a relic of the past.

Accordingly, Xavier Fettweis, climate researcher (University of Liège) claims: “The volume and intensity occurring today… is on par with what models predict will occur nearly every summer by 2050. So record-breaking summers like this one… will cease to be remarkable. We’re already on that path.” (Source: Alejandra Borunda, A Heat Wave is Turning Greenland’s Ice to Slush. That’s Bad News, National Geographic, August 1, 2019)

It’s one more haunting example of global warming decades ahead of the science. As it happens, climate change’s impact on the big ice cube is the rip snorting hard-hitting kind, proving that science can’t keep up with global warming’s sure-fire rapidity. It’s way too fast for scientists to calculate, re-calculate and ponder. Hmm.

Of course, there’s a bigger issue lurking behind the scenes, meaning an even bigger melt further to the north, the Arctic, which, in turn, directly impacts and disfigures jet streams at 30,000-50,000 feet above ground level by aborting the normalized temperature differentiation between the polar north and the tropics. In turn, it brings on loopy jet streams that go nowhere but alter and distort normal weather, which, as a result, pauses and sets in. For example, Europe’s recent record-setting heat and the U.S. Midwest’s massive record-setting floods experienced weather that set in and didn’t move. It’s nature’s revenge.

Meanwhile, the rapidity of Greenland’s meltdown exposes the powerful significance of interconnectivity of ecosystems as major existential risks to normalized living standards. There is no bigger threat to regular ole living standards than global warming, and it’s coming on faster than scientists can predict. They need bigger calculators.

At some point in time, and quite honestly it can’t come soon enough, political debate amongst the world’s leading countries will be forced to discuss seawall fortifications for coastal cities. But in actuality, it’s more likely that high tides repeatedly flooding New York City and Miami will upstage any and all serious, meaningful debates. Then, the scramble will be on but too late.

“Pray for rain or migrate” is today’s new world order. But, it’s only just beginning.