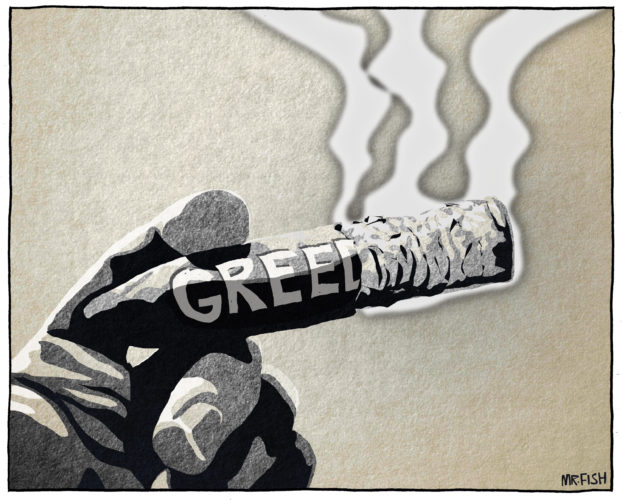 LONDON—The hulk of Grenfell Tower, its charred sides covered by sheets of white plastic, stands as a mute and ominous testament to the disposability of the poor and the primacy of corporate profit. On June 14, 2017, a fire leaped up the sides of the 24-story building, clad in highly flammable siding, leaving 72 dead and 70 injured. Almost 100 families were left homeless. It was Britain’s worst residential fire since World War II. Those burned to death, including children, would not have died if builders had used costlier cladding that was incombustible and if the British government had protected the public from corporate predators. Grenfell is the face of the new order. It is an order in which you and I do not count.

I walked the streets around the tower on the two-year anniversary of the fire with Kareem Dennis, better known by his rapper name, Lowkey (watch his music video about Grenfell)—and Karim Mussilhy, who lost his uncle, Hesham Rahman, in the blaze and who has been abruptly terminated from two jobs since the disaster apparently because of his fierce public denunciations of officials responsible for the deaths. Families, some wearing T-shirts with photos of loved ones who died in the conflagration, solemnly entered a building for a private memorial. A stage was being prepared for a rally that night a block from the tower. It would draw over 10,000 people. Flowers and balloons lay at the foot of the wall that surrounds the tower. Handwritten messages of pain, loss and love, plus photos of the dead, covered the wall. The demolition of Grenfell Tower will take 18 more months as each floor is methodically dismantled.

The lead contractor for a refurbishment of Grenfell Tower that began in 2015—a refurbishment focused largely on cosmetic appearances to make the public housing building blend with more expensive high-rise apartments nearby—was aware of the danger of installing cheap cladding. The fire, purportedly started by a faulty Hotpoint refrigerator-freezer, swiftly ignited the cladding. The flames jetted up the sides of the tower, making escape, especially on the upper floors, impossible.

The primacy of profit, as it always does in the neoliberal order, took precedence over human life. The combustible cladding that turned Grenfell Tower into a 24-story funeral pyre is banned in countries such as Germany and is not permitted on buildings in the United States over 40 feet tall. Grenfell Tower was over 200 feet tall.

Corporations in Britain, as in the United States, have pushed through legislation to abolish oversight and allow themselves to ignore safety standards and “self-regulate.” It does not appear, amazingly, that the flammable cladding violated any of London’s diminished fire codes. Boris Johnson as the mayor of London slashed the city’s fire service budget and presided over the closure of 10 fire stations and the removal of 27 fire engines. When the fire broke out it took over half an hour to get a high-ladder truck to the blaze. The ladder could only reach the 10th floor and was not able, 30 minutes into the blaze, to get above the flames to extinguish fire racing up the building.

“There was a family of three generations that died in the fire,” said Lowkey, who lives near the tower and witnessed the blaze. “We could see them on the 21st floor at the window. They were gesturing towards us with what appeared to be T-shirts or white towels. We prayed for some type of divine intervention. We saw a helicopter. The helicopter headed towards their window. People trapped on the inside were calling to people on the outside ‘don’t worry, the helicopters are going to save us.’ The helicopter came within 150 or 200 meters of the room. Then it turned around. That turnaround was the most excruciating part for me. I realized they were going to watch these people die in the window. They were a family from the grandmother to the grandkids that died. Six or seven hours later I had to leave the area. I got on the train. I was a wreck, crying. I picked up The Evening Standard. On the front page was a picture from a horizontal angle of the family, meaning the helicopter was taking a picture of them. We are a society obsessed with the spectatorship of suffering.”

“I was raised by my grandmother,” Mussilhy said. “My uncle took on the role of a father. Uncle Hesham was the fun uncle. He was always showering us with gifts, sweets and toys. He taught me how to read in Arabic. He taught me about religion. He taught me how to tie a tie and the values of work and school and stuff like that. He was quite ‘banter-ish.’ He’d always make fun of me for being rubbish at football, even though I wasn’t. He got his flat about six years ago. He spent a lot of time up there because he had problems walking. He was unable to walk without a walking stick. He used to write a lot of poetry.”

Mussilhy, whose family is from Egypt, quoted from one of his uncle’s poems titled “My Will” in which he asked those he loved to put “a smile on your face when I’m gone” and to have no “tears or sadness near my grave.”

His uncle, who was a hair stylist, lived on the top floor. It was three months before his body was recovered.

The three of us stood next to a blue tiled wall.

“People went online and found really interesting documents about what the [borough] council had been doing, about some of the companies, about some of the personal financial details about people within the council, and had taped it up on the wall,” Lowkey said. “That [area of the wall] was one of the first places to be cleared away.”

Attorneys representing the estates of 69 of the 72 people who perished in the high-rise, along with 177 survivors who suffered life-altering injuries, have mounted a class-action lawsuit in Philadelphia charging three U.S. corporations with wrongful death and products liability.

It did not take long for the right wing to begin to belittle the victims, derisively calling Grenfell “Falafel Tower” and claiming that many inside were undocumented immigrants and should never have been in Britain. The anti-immigrant sentiment, fueled by deindustrialization, draconian cuts to social services in the name of austerity, the capture of political power by a corporate elite and falling living standards among the white working class, mirrors the toxic political climate in the United States. Fifty-two percent of British voters in the summer of 2016 chose to exit the European Union, the British equivalent of building a wall to keep immigrants out. The fanning of virulent racism and Islamophobia have been convenient weapons in the hands of the elites, who seek to deflect attention from the assault they are carrying out against the entire working class and the working poor, regardless of color or ethnicity.

Lowkey, referring to the large number of immigrants who live in this neighborhood, said, “There are several ways in which the local community has been separated in public consciousness from the rest of the country. There are almost 400 buildings across the country that have, as far as has been reported, the same Arconic cladding, Reynobond PE. This cladding has 6 millimeters of polyethylene in the middle of it. It is on hospitals, schools and cinemas. In order to avoid social unrest, there had to be an atomization of the population. What happened here should be viewed as particular and specific to this community. This is the reason they depict people inside the tower as undeserving outsiders and others. [Prime Minister] Theresa May said we will give an amnesty to anybody who was here illegally that was in Grenfell Tower. That sends a signal to people around the country that those people in that tower were here illegally. This has become a mantra repeated around the country.”

Muslims in Britain, as in the United States, have been targeted. The British government’s Counter-Terrorism and Security Act of 2015 includes a program called Prevent. Public professionals are forced by law to report behavior patterns that the security services claim lead people, including children, to become terrorists. Public professionals, especially teachers, are instructed to watch for “absenteeism,” “crying,” “unhealthy use of the Internet,” “a desire for excitement and adventure,” “a desire for political or moral change,” “family or friends’ involvement in extremism” and “being at a transitional time of life.”

“Prevent turns the public sector into an appendage of the war on terror,” Lowkey said. “Doctors, opticians, social workers, nurses, teachers, even those who work with children as young as 3 years old in nurseries, are legally obliged to report to Prevent signs of radicalization.”

“Signs of radicalization are defined by Prevent as changing of a hairstyle, being withdrawn, not attending class, talking a lot in classes, not talking a lot in classes, getting tattoos, looking for a higher purpose, looking to achieve moral or social change within a society—all of those things are things that can render a person reportable to Prevent,” he said. “Prevent allows police to interrogate children without the presence of their parents.”

Many Muslims say the government program legitimizes racism and fuels Islamophobia, which is on the rise in Britain. A 10-year-old was reported to anti-terror authorities for misspelling “terraced house” as “terrorist house.”

Muslim student groups, especially at universities, say they feel constantly watched and in danger of being reported for any activity or statement, however benign, that is deemed a bench mark on the road to extremism. Muslim children can be removed from their families if the counterterrorism program decides the parents espouse extremist beliefs. David Muritu, a maths lecturer, was fired earlier this month from Sandwell College in the West Midlands after he wrote the words “racist” and “should be illegal” on a poster promoting Prevent.

A spate of attacks on Muslims has included the vandalizing of five mosques in March in the second-largest city in the United Kingdom, Birmingham, which has a large Muslim population. White supremacist groups, such as the English Defence League, the Scottish Defence League and the British National Party, spew racist rhetoric, xenophobia and hate speech in public rallies and marches. These neofascist organizations condone and perpetrate physical assaults on Muslims.

A divided population is more easily controlled. It turns its venom on itself. The march of corporate totalitarianism intends to transform all of us into serfs regardless of our religious beliefs or ethnicity. It skillfully manufactures scapegoats—immigrants, Muslims, black people and others of color, dissidents, the poor—so the rising fury of a betrayed population will vent against a demonized target. This disease is as far advanced in Britain, which looks set to get the Trump-like Boris Johnson as prime minister, as it is in the United States. It is spawned by the same ideology, neoliberalism, and the same corporate forces that have seized political and economic power and orchestrated social inequality. These forces are, to us and to the ecosystem that we depend on for life, forces of death. The Grenfell fire is a harbinger of a day when greed will rule, human life will be cheap and the rule of law will be meaningless. Those who lost friends and family in the fire, or who witnessed the disaster, know a truth about corporate power that the rest of us must quickly learn. 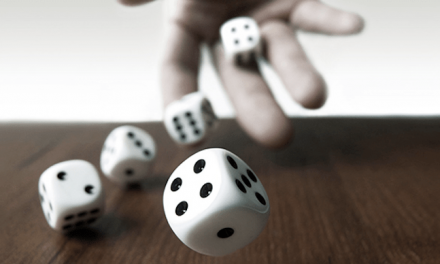 The Empire’s War On Oppositional Journalism Continues To Escalate