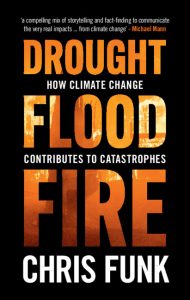 The world is on fire like never before: “Wildfires Have Erupted Across the Globe Scorching Places That Rarely Burned Before” (CNN headlines July 22, 2021); but not only is fire raging, Biblical floods are destroying entire communities, e.g. 9,000 homes swept away in central China (BBC News) as towns were nearly decimated in Germany, “Europe’s Deadly Floods Leave Scientists Stunned” (Science, July 20, 2021). All of that with worldwide droughts at a fever pitch.

Is the sky (actually) falling?

According to SPEI Global Drought Monitor, the current drought cycle is worldwide. Only Antarctica is spared. In some corners of the world water reservoirs are dangerously low, big hydroelectric plants sputter, as long-standing verdant forests morph into dried-out firetraps.

This shocking coincidence of three major catastrophic events hitting at the same time is likely unequaled in modern history. Why are the most serious threats to 21st century civilization, i.e., drought, fire, and floods simultaneously ravaging the planet from east-to-west, north-to-south?

Funk provides a very accurate description of the linchpin of climate-related trouble in one brilliant paragraph: “We hang isolated in space, with only an incredibly thin layer of atmosphere standing between us and oblivion. If we could drive our car straight up at highway speeds, we would approach the edge of the atmosphere in a matter of minutes. And into this thin membrane we are dumping about 28 million gigatons of carbon dioxide every day. The rational decisions of nearly 8 billion people are resulting in collective insanity as we choose to destroy the delicate balances that support Earth’s fragile flame.” (pg. 21)

Moreover: “Climate change is making climate extremes more frequent and intense… Not in the future, but right now… Over the past few years (2015-2020) the fingerprints of climate change have seemed more like a slap. Extreme heat waves, floods, droughts, and wildfires have exacted a terrible toll on developed and developing nations alike. These extremes have impacted hundreds of millions of people and resulted in hundreds of billions of dollars in losses, all across the globe.” (pg. 5)

Early on in Funk’s book a chart of weather-related losses (1980 to 2018) clearly shows a four-fold increase in less than 40 years, which is foreboding and demanding of attention. Funk educates readers how and why such huge increases have occurred in such a short time: “One goal of this book is to describe how energy moves through the Earth’s energy system, so you can both better appreciate the beauty of our life-sustaining complex planet, and how human-induced warming is altering this system in a dangerous and alarming way.”(pg. 12)

Drought Flood Fire delves into the onset of complex life, as well as the rudimentary basics of the mechanisms by which greenhouse gases warm the planet, to wit: “Even most people who believe in climate change don’t really understand the basic mechanism of why adding greenhouse gasses to the atmosphere has to increase the amount of energy reaching the surface of the Earth.” (pg. 65)

This book serves as a tutorial and, as such, a compelling asset for students and advocates and world policymakers. It’s an authoritative teaching tool with occasional fun images that depict the ironic fragility of our enduring planet, e.g., “Imagine an egg painted blue. The atmosphere is as thick as the blue paint.” (pg. 67)

Ever wonder how tropical storms, hurricanes or cyclones orginate via understanding the intricate details behind the reported facts, in plain English?

Is Earth uniquely fragile or steadfast, and how is it that humans disrupt its ecosystems?

Indeed, Drought, Flood, Fire is a primer on the most elemental developments of all aspects of the universe and solar system and the origin of complex life itself. This seminal book is essentially a lecture series about the remarkable features and development of the universe ultimately devolving into today’s anthropogenic distortion of nature. It’s well worth the read.

Funk personally describes his approach, as follows: “Some aspects of climate change are complex and hard to fathom. Some are fairly straightforward concepts and facts that everyone really needs to understand. This book is mostly about the latter. Some of the most important mechanisms of climate change can be understood by everyone: Why do greenhouse gasses have such a direct warming effect on our planet? How does this warming intensify the impact of droughts and fires? How can this same atmospheric warming, paradoxically, also increase the frequency of extreme precipitation events and floods? This book approaches these questions with a Do-It-Yourself  (DIY) attitude.” (pg. 59)

He explains the dynamics of extreme events, as for example, the interrelationship of California fires, warmer air temperatures, and drier vegetation like the infamous Thomas Fire of 2017, which was for a brief period the biggest, most damaging fire in California history with flames roaring six stories into the sky.

Interestingly enough, along with that California example, Funk spells out warning signals for all of humanity, to wit: “By looking carefully at both weather data and disaster statistics, we can see with our own eyes that a 1°C warming is already having dire consequences.” (pg. 64)

That one fact alone “dire consequences” at only 1°C, especially in the context of a world currently at 1.2°C above baseline, should alert policymakers around the world to the inescapable gravity of today’s scenario with worldwide firestorms, floods, and droughts bordering on the apocalyptic, which are broadcast on TV for all to see.  These are unprecedented, out of control, real time scenes of climate destructiveness never witnessed before. And, it’s happening around the world, and it’s happening now. It’s unvarnished reality!

According to Funk, “The intent here is serious. California just experienced a large increase in fire extent, due in part to an exceptional increase in temperatures. We will likely see this happen again, and again, over the next forty years.” (pg. 65)

Statements like that are backed up by scientific data that needs to be front and center for policymakers. His book should be on the desks of every policymaker because immediate remediation measures have never been more urgently crucial, especially with so much destruction at today’s global temperature of only 1.2°C above baseline. Whether they thoroughly read the book or not, policy wonks need a reminder of Drought Flood Fire on their desktops. It’s essential.

The rate of increase of global warming, as detailed in Funk’s book, sends a clear message of deep concern. Figure 5-3 in the book demonstrates “exceptionally warm” ocean and air temperatures throughout the planet. It’s the NASA Goddard Space Flight Center’s monthly temperature data set of sea surface and land temperatures. In true Michael Mann fashion, the graph is parabolic!

The graph shows the fraction (percentage) of Earth that’s exceptionally warm over time, as explained by Funk: “This time series should deeply disturb you. The fraction… is increasing very rapidly. When I was born, it was about 2%. By the time I started graduate school, it was around 5%. When my children were born, it hovered around 7%. Since that time the area of exceptional warmth has doubled again to around 17%, increasing rapidly just between the beginning and end of our focus period (2015-2019). Now almost one-fifth of the globe experiences extreme temperatures at any given time.” (pg. 99)

Those extremes result in severe health impacts, including death. For example, China has reported “at least 300 deaths” as a result of recent record-making floods whilst the same flooding traps passengers in subway trains standing in neck-deep water in the provincial capital Zhengzhou; meantime, hundreds of people died in the recent Pacific Northwest heatwave, according to estimates; there were at least 486 deaths in British Columbia, 116 in Oregon, 78 in Washington… there were more than 3,500 emergency department visits for heat-related illness this past May and June in a region that includes Alaska, Idaho, Oregon and Washington State, which is normally a very cool region.

Funk’s research group has developed a methodology to provide accurate estimates of maximum air temperatures called the Climate Hazards Center Infrared Temperature dataset.  His accomplishments at U of Calif. Santa Barbara involve satellites and computers used to identify and predict climate hazards. Because of the planet’s berserk climate system of late, Funk’s work should be mandatory for nation/state policy wonks.

Funk’s Extreme Event Attribution methodology identifies “the fingerprint of climate change” well ahead of time.  For example, his research group explains the mechanisms or observations by which extreme weather events can be anticipated to help formulate humanitarian aid well ahead of a severe drought. As for example: “In late 2016 we predicted the spring 2017 drought that struck Kenya, Somalia, and southern Ethiopia.” (pg. 15)

According to Funk, we live on a “Goldilocks Planet” with a life support system entirely dependent upon a “very thin atmosphere and the absolute necessity of maintaining temperatures with a narrow range.” In that regard, Drought Flood Fire focuses on what’s happening to the planet now vis a vis extreme heat, extreme precipitation, and out of control droughts, wildfires, and hurricanes turbocharged by human-generated greenhouse gases.

Of interest, in spite of Funk’s careful examination of the dangers presented by human-generated greenhouse gases and examples of how devastating those have been at only 1°C above baseline, towards the end of his book he discovers an upbeat note by referencing the German and California experiences of effectively mitigating GHGs whilst experiencing rapid economic growth as examples of what the world can do to favorably resolve the climate crisis.

He goes on to tabulate all of the wonderful positives of modern day society, the accomplishments in medicine, science, etc., which are all true.  Yet, it somehow comes across as way too Disneylandish in the face of repeated failures by the nations of the world to uphold their climate mitigation commitments. After all, every world climate conference, like Paris 2015, has failed, horribly failed. This is worse than a tragedy and cause for not holding one’s breath over the outcome of the 2021 UN Climate Change Conference to be held in Glasgow in November called COP26 where 30,000 delegates are expected.

Maybe it would be better if COP26 is canceled and save the millions spent on 30,000 professionals gathering to chitchat, meaning “lots of smoke but no flames,” except for the long-standing forests of the world, which are burning like crazy.

At the end, Funk comes back to reality, which is crucial for understanding where the planet’s health stands and what must be done, to wit: “Right now we appear to be headed for 3°C of warming or more. This level of warming would almost certainly have catastrophic and potentially irreversible impacts on our planet’s life support system” (pg. 299)

But, according to Drought Flood Fire, it’s already happening with just 1°C warming, as Funk additionally queries: Imagine +3°C or +4°C bringing on decimated crops, superstorms, and considerably higher sea levels, but yet: “Even the difference between 1.5°C and 2°C of warming will make an incredible difference.” (pg. 300)

All of which gives one pause with today’s 1.2°C above baseline as Biblical droughts, floods, and fires scare the daylights out of scientists. They’re publicly admitting it, which is a refreshing bold approach.  Hopefully, their deep-seated concerns override, supersede the bureaucratic nightmarish results of past COPs.