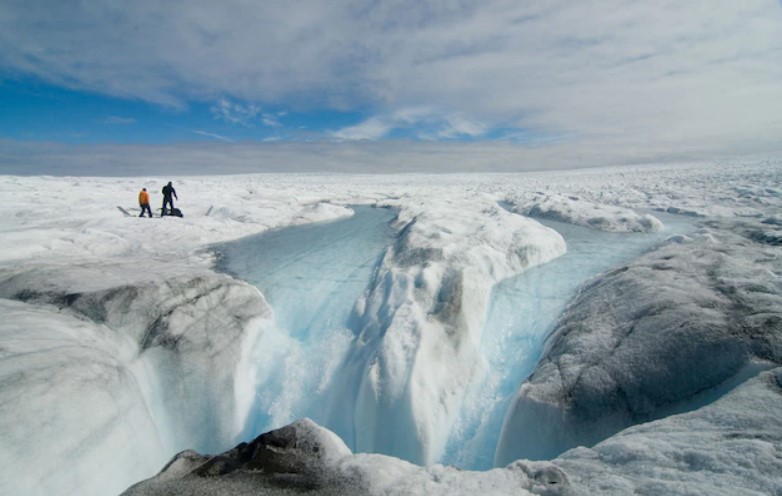 It rained for 9 hours at Summit Station/Greenland, 10,530’ elevation.

Greenland is sending signals to coastal metropolises around the world that it’s never too early to start building seawalls. These are not mixed signals from the big ice island. Rather, they are straightforward signals indicative of rapid breakdown of average ice thickness of 5,000 feet sooner than ever thought possible.

In conjunction with freakish rain at the top of Greenland, the response to global warming has increasingly exposed humans as farcically trapped behind the biggest eight ball of all time by not taking global warming seriously. Now, there may be no way around it.

Greenland is acting out. For example, it rained at the Summit Station at 10,530 feet above sea level where it has never rained throughout all recorded history. It’s not supposed to rain at the top of an ice sheet nearly two miles above sea level. But, it did.

He starts by explaining how the first rainfall in recorded history at the summit happened one year ago. An atmospheric river caused it. Accordingly, he explains: “These atmospheric rivers are occurring more frequently.”

Here’s how Beckwith sees it: “The idea that the ice on Greenland will last decades and decades, even centuries. I think you could throw those ideas out the window as you get more and more atmospheric rivers, you’ll get more and more abrupt changes in the melt rate.”

On the first day of rain at the Summit, it rained every hour, which was unprecedented and shocking to the scientists at the station at 10,000 feet elevation. Temperatures were more than 18°C higher than normal.

The implications are horrifying. For example, when and how much sea level rises has become a roll of the dice that threatens every coastal city of the world. When and how much?

Keep in mind nobody is gonna ring a bell or pre-announce: Hey, Greenland’s crumbling so fast that we’d better head for the hills. Nobody is going to make a public statement like that, and if they did, climate deniers, including 52% of House Republicans and 60% of Senate Republicans would tear them to pieces in the media labeled as a “commie plot,” or as a “lie to scare Americans,” or something equally stupid and juvenile that a whole bunch of people would believe.

Regarding the analysis according to Christopher Shuman, a glaciologist with University of Maryland: “To see this many melt events at this intensity in such a short period is absolutely remarkable in the historic records that are available to us… We now see three melting events in a decade in Greenland – and before 1990, that happened about once every 150 years, and now rainfall in an area where rain never fell,” Ibid.

The frequency of atmospheric rivers driven by highly amplified jet stream patterns is increasingly troublesome and threatens continued rapid melt. This is also an issue in Antarctica.

Since the timeline and extent of sea level rise is now an unknown more so than ever before and in the face of rapidly deteriorating conditions at both poles, coastal communities worldwide should preempt the unknown by building sea walls, especially low-lying areas like Miami. And yet, there are no hues and cries across the land to initiate emergency measures to hold back rising seas.

Bottom line according to Beckwith: “Throw out all of the models, the idea that it can take decades and decades or even centuries for a place like Greenland ice to melt out with a huge increase in sea level rise… If atmospheric rivers become more frequent, the Greenland ice sheet is basically a sitting duck to be obliterated by these atmospheric rivers.”

“In just one week in July last year, the ice and snow virtually disappeared from the surface of Greenland’s barren interior. Only a few months earlier, when Box predicted this might happen, he was dismissed by many of his fellow scientists as an alarmist.” (Source: Greenland Melting, Rollingstone, 2022)

Box explains the problem of science: “For most scientists publishing a paper is a masturbatory act… Few people read it, you feel good, and then it’s over; it has no influence on policymakers; it does nothing to increase public understanding of what is happening to the climate system,” Ibid.

Meanwhile, according to NASA: Greenland and Antarctica are losing three times as much ice each year as they did in the 1990s.

Years of warnings about dangers of excessive fossil fuel CO2 emissions have not moved the needle. Fossil fuels today account for 75-80% of the energy mix, same as 50 years ago. And, according to the International Energy Agency, fossil fuel companies plan on $1.5T of new production between now and 2030.

With warnings galore of dangers of global warming, even The Economist felt compelled to carry an article Aug. 25, 2020: The Greenland Ice Sheet has Melted Past the Point of no Return: “The ice loss, they think, is now so great that it has triggered an irreversible feedback loop: the sheet will keep melting, even if all climate-warming emissions are miraculously curtailed. This is bad news for coastal cities.”

The Economist article was two years ago, one year before the unusual rain incident at Summit Station, which was a big time wake up call. Yet, the planet’s biggest threat remains worse than ever. Alas, at some point in time global warming warning articles, like this one, will become meaningless. Gurgle!